"If I were to tell you that marketers were using astrological signs as a way to understand/target specific groups of people, you’d tell me that’s a ridiculous strategy." So begins a rant post by Adam Singer on Search Engine Watch. And I couldn't agree more.

Amidst all the talk about the declining population of younger working-age people in Vermont and much of the Northeast, this research finding from the Pew Research Center Fact Tank struck me: "Immigration projected to drive growth in U.S. working-age population through at least 2035."

To me, this is yet one more reason to increase our awareness, knowledge, and communication competencies around cultural differences, diversity and inclusion. 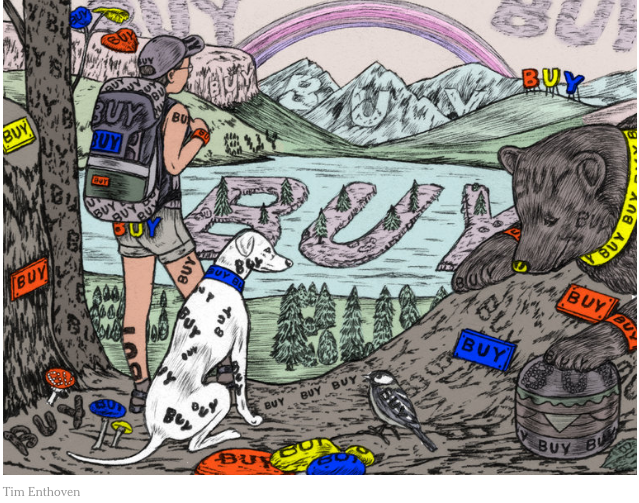 We often work with public sector government agencies, so we are acutely aware of the financial and political pressures they experience. (To our way of thinking, our client's pain is our pain.) But recent news that paid advertising placements were being sold in U.S. national parks startled us.

Ethical Investing (and Shopping) Made Easy? I've watched with excitement the trend to make it easier for ordinary investors to identify sustainable, carbon-free, ethical or socially responsible investments. Nationally — see An Investment Strategy to Save the Planet, New York Times' Fixes column), and locally — see Is Your Money Invested Where Your Values are? — our options are increasing.

Yet the reality is that for most people, more of their money is spent day-to-day than is invested. So Wired's article Want to Be an Ethical Shopper? Get DoneGood’s Chrome Extension caught my eye. The White House hosted the United State of Women Summit on June 14, inspiring those participating both in real life and virtually. #StateOfWomen is a case study in an event done well. This photo of 11-year-old Mikaila Ulmer, founder of Me & the Bees Lemonade, as she introduced President Obama explains one reason why.

That reason is a consistent focus on the why — in this case, equality, diversity, and inclusion. As noted by attendees ranging from Wired magazine to the League of Women Voters, in addition to "political heavy weights such a President Barack Obama and First Lady Michelle Obama, Vice President Joe Biden, Representative and former Speaker of the House Nancy Pelosi, Attorney General Loretta Lynch as well as Hollywood elites, including Oprah, Tina Fey, Mariska Hargitay, Kerry Washington, Patricia Arquette, and national business leaders like Warren Buffett and Dina Habib gracing the stage," participants from around the country were all ages and more diverse than your every-day star-studded White House event. The #StateOfWomen consistently demonstrated the why of the summit.

Ouch! Women Are Being Recognized Again March marks Women’s History Month again, but I am not celebrating. Stories and images of courageous women of the past are everywhere. These women deserve recognition — they fought hard to advance equal rights and access for the majority of the U.S. population who happen to have been born female. Yet in 2016, I find it increasingly difficult to talk about celebrating for one month a year when there are so few signs of positive progress to improve the lives of women. How can we better harness attention, social change innovations, and sustainable economy principles to advance gender equity? Ready to go... Ten policy solutions to close the funding and opportunities gaps for women and minority-owned businesses are being presented at the 4th Annual Sustainable Business Summit in Washington, D.C. this week. The American Sustainable Business Council's Working Group for Women (WGFW) and its Diversity & Inclusion Working Group (D&IWG) developed the policy solutions together over the past year. As an ASBC board member and co-chair of the Working Group for Women, I have been deeply involved in this work with my colleagues here in Vermont, and nationally. The subject is definitely "on our radar" and I look forward to the evolving discussion as we move forward.

It's likely that your eyes glaze over as quickly as mine do when you hear lofty sustainable local food system goals and "walking the talk" rhetoric from large institutions. So it's a delight when you see sustainability values in action like the recent news that the Intervale Food Hub is now an approved local food supplier to the local behemoth, University of Vermont Dining Services. Kudos to all involved!