Email the link to this Ultimate Guide

Inclusive Language reflects a broad range of identities and perspectives that does not stereotype or demean people based on implicit bias and perceptions of personal characteristics or cultural background.

It is hard to believe...

It’s been more than fifty years since racial and gender discrimination were defined in law, and more than forty years since Section 504 introduced the concept of disability civil rights in the U.S. Yet many people continue to feel uncomfortable having conversations about these subjects. You are a capable communicator, but imagine yourself...

...in a meeting with strangers where you are suddenly concerned about accidentally saying the wrong thing or offending someone. In unfamiliar situations, you may feel like you could easily but inadvertently say something insensitive.

...or at work, where your organization struggles to find the inclusive visual and verbal language to demonstrate your commitment to support diversity through your public communication and marketing.

Sound familiar? Changing old patterns can be intimidating at first. That’s why we created the Guide to Inclusive Language 101. The goal is to help you look at how to reduce the barriers that unconscious biases in your visual and verbal messages can present — in conflict with your desire for clear, inclusive communication — that is, to explore how you can consistently communicate in a way that reduces bias, increases access, and supports diversity and inclusion.

The legal frameworks central to our subject include both business/industry-specific regulations and employment regulations grounded in civil rights and privacy laws. Key laws in the U.S. include:

Though additional state laws and regulations also play a role, it is a desire to go above and beyond legal requirements that challenges many mission-driven organizations.

Let’s take a closer look at other dimensions of our population.

Millennials are more likely to define diversity as pertaining to the individual mix of unique experiences, identities, ideas, and opinions. Prior generations, on the other hand, frame diversity in terms of demographics, equal opportunity, and representation of identifiable demographic characteristics.
– Deloitte survey

Communication that consistently demonstrates your principles over time builds trust and relationships — the foundation for any mission-driven organization. Communication that offends, demeans, or creates dissonance in the minds of your audiences, employees, partners or investors erodes trust.

Communicating your organization authentically understands and values a more diverse and inclusive society can help you:

2. Differences of any kind should only be mentioned when relevant. Marital status, age, sexual orientation, racial and ethnic identity or the fact that a person has a disability should not be mentioned gratuitously.

3. Use the appropriate level of specificity.

4. Be sensitive to labels.

5. Put the person first (e.g., people with diabetes” or “Mary, who uses a screen reader”)

Glossary of Definitions and Shared Language

Accessibility refers to how easily a person with disabilities can negotiate a physical or virtual environment, for example, part of a building, a structure, or a website. Accessibility also refers to the design of structures, products, devices, services, or environments for people who experience disabilities.

Human diversity means differences among people. Diversity of thought, or cognitive diversity, is more than age, religion, gender, race, physical ability. It’s about how different point of views are accepted and valued. Diverse workplaces are composed of employees with varying characteristics including, but not limited to: religious and political beliefs, gender, race, ethnicity, education, socioeconomic background, sexual orientation, and geographic location.

Seeking out, identifying, understanding, and removing barriers to full participation and belonging; intentionally including additional difference in a group or process; and encouraging high levels of both individuality and belonging. Inclusive Language does not exclude, stereotype, or demean people based on perceptions of personal characteristics or cultural background.

Ageism is a system of beliefs, attitudes, and actions, that affects all people at all ages, but is considered most detrimental for the physical health of our oldest citizens. Ageists view a person’s age number or chronological age as a marker of essential characteristics or type, leading to stereotyping and suppressing the experience and true nature of individuals.

Adultism is a system of beliefs, attitudes, and actions that devalue and dehumanize young people, denigrates youth experiences, and dismisses their ideas.

An acronym for "Black, Asian and Minority Ethnic," primarily used in the U.K. to describe any person who is not white or Caucasian.

An acronym for "Black, Indigenous, and People of Color," used primarily in the United States to describe any person who is not white or Caucasian.

A disability is a physical or mental illness, injury, or condition that limits a person's movements, senses, or activities. Disabilities require the use of language that maintains the integrity of the individual as a person first (the person's name or pronoun should come first), and descriptions of the disability should not be used as an adjective modifying the person (e.g., "a man who has bipolar disorder” is acceptable use.)

Discrimination occurs when a person, or a group of people, is treated less favorably than another person or group because of their background or certain perceived personal characteristics.

Gender is cultural and refers to one’s role, not one’s biological sex. Gender identity is how a person thinks about themselves, for example: girl/woman, boy/man, transgender/gender non-conforming.

An acronym for 'Historically Underrepresented Groups.' Given changing U.S. demographics, it is a more a more accurate term than “minority” and a more inclusive term than “people of color” because depending on the context, discrimination and bias may be based on gender, age, disability, religion, race and ethnicity, or socio-economic class.

An immigrant is someone who chooses to resettle to another country. The United States has a legal process for an immigrant to seek legal residency and eventually citizenship. A refugee is someone who has fled his or her home country. Refugees can apply for asylum in the United States. The U.S. Citizenship and Immigration Services says: "Refugees are generally people outside of their country who are unable or unwilling to return home because they fear serious harm.” An expatriate, or expat, is a person living in a country other than that of their citizenship. The term expat popularly refers to professionals or skilled workers sent abroad by their employers.

A collection of feelings of inadequacy that persist despite evident success.

Abbreviation for Lesbian, Gay, Bisexual, Transgender, Queer, Intersex, and Asexual, although there are several variations. LGBTQ+ is an umbrella term that is used to refer to the community as a whole.

A comment or action that is subtly and often unintentionally hostile or demeaning to a member of a minority or marginalized group.

An acronym standing for “Person of Color.” This term is used primarily in the United States to describe any person who is not white or Caucasian.

A special right, advantage, or immunity granted or available only to a particular person or group, often implicitly and ‘invisibly’ to those who have it.

Race refers to a system of classifying individuals based on observable characteristics that are genetically determined but not always consistent. Ethnicity refers to a sizable group of people who share a common and distinctive racial, national, religious, linguistic, or cultural heritage. Racial and ethnic identity can change over time and become dated; use commonly accepted designations such as census categories.

Sexual orientation has to do with a pattern of attraction, behavior, identity, and social contact and may be different from sexual preference. Sexual partner preference suggests voluntary choice, while it is widely accepted today that sexual orientation is not a choice.

The practice of doing something (such as hiring, promoting, or otherwise lifting up a person who belongs to a minority group) only to prevent criticism and give the appearance that people are being treated fairly.

Transgender/gender diverse, or trans for short, is when you do not exclusively identify as the gender you were assigned at birth. Cisgender is the opposite of transgender.

An experience which causes an individual, normally unintentionally and indirectly, to recall previous trauma.

Social stereotypes about certain groups of people that individuals form outside our own conscious awareness. Everyone holds unconscious beliefs about various social and identity groups, and these biases stem from the human tendency to organize social worlds by categorizing. Implicit bias refers to the attitudes or stereotypes that affect our understanding, actions, and decisions in an unconscious manner.

Groups who have traditionally not had equal access to economic opportunities because of discrimination or other societal barriers. This may vary by context and geography but can include race, gender, ethnicity, sexual-orientation, disability, or low-income status.

Womxn is an alternative spelling of "women" that is considered a more inclusive term to explicitly include non-cisgender women.The term's advocates emphasize its inclusive nature as its key benefit. "While hard to pronounce, “womxn” is perhaps the most inclusive word yet using an “x” to tinker with the word's literal approach to gender in a similar way as “Latinx,” which has become an ungendered alternative to words like “Latino” and “Latina.”

Guidelines and Examples by Topic 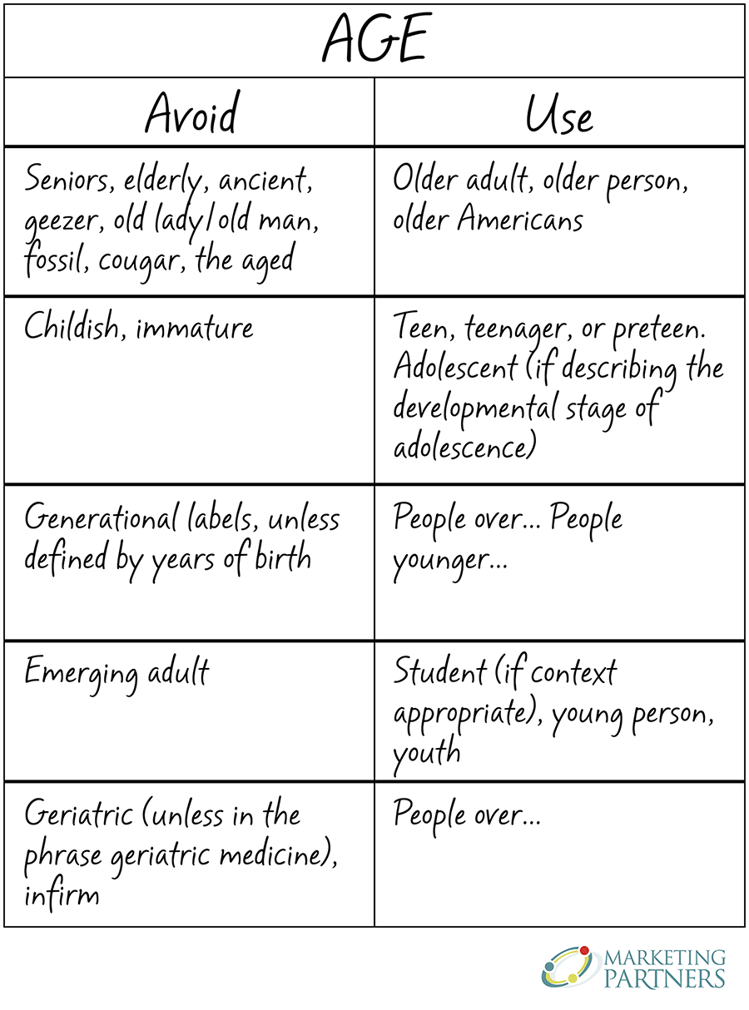 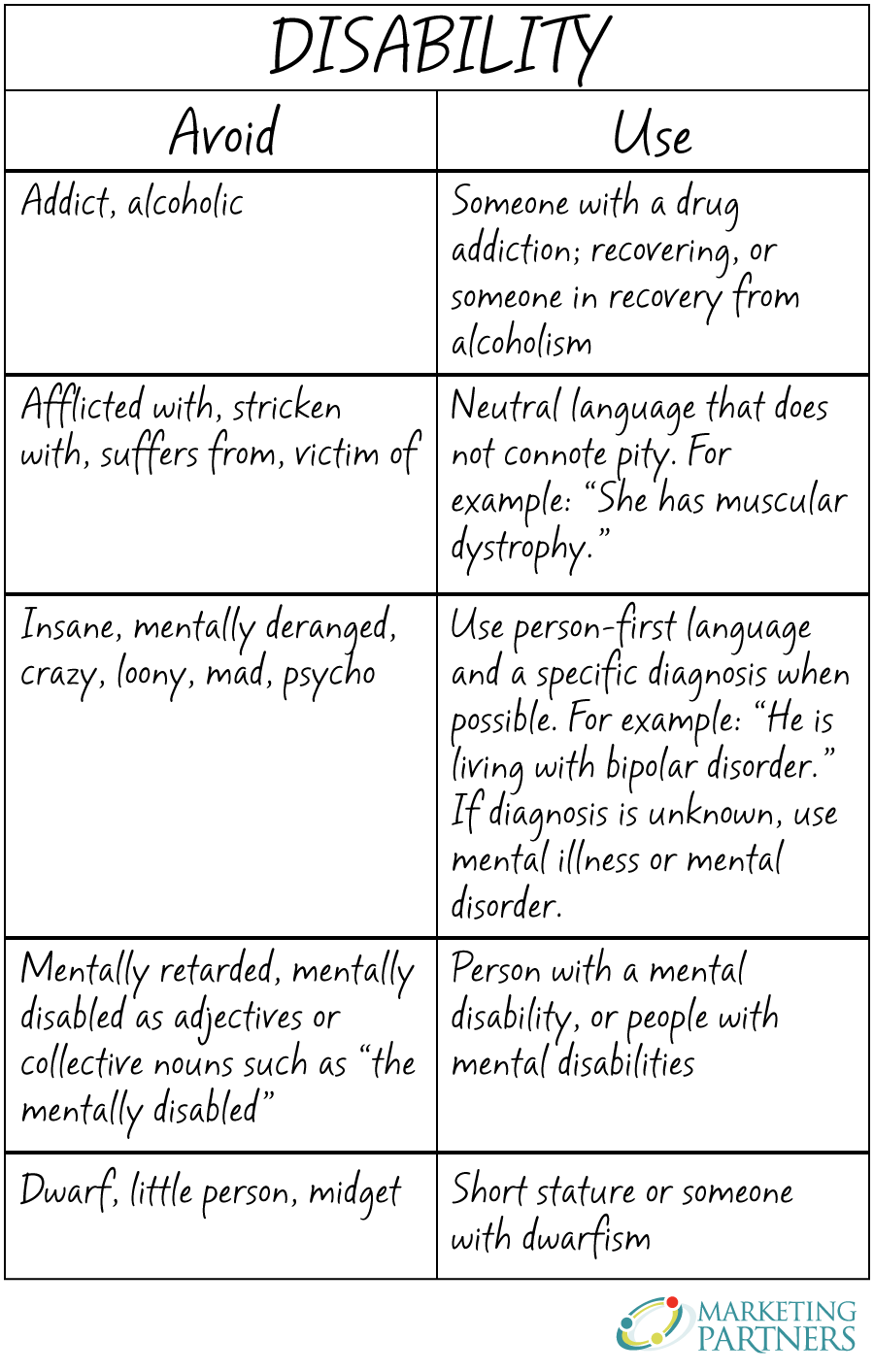 General Principles for Reducing Bias about Gender and Sexual Orientation

One of our favorite summaries of the gender-sex-orientation distinctions is the Gender-Bread Person illustration with key terms below that we first saw in a Substance Abuse and Mental Health Services Administration (SAMHSA) webinar. 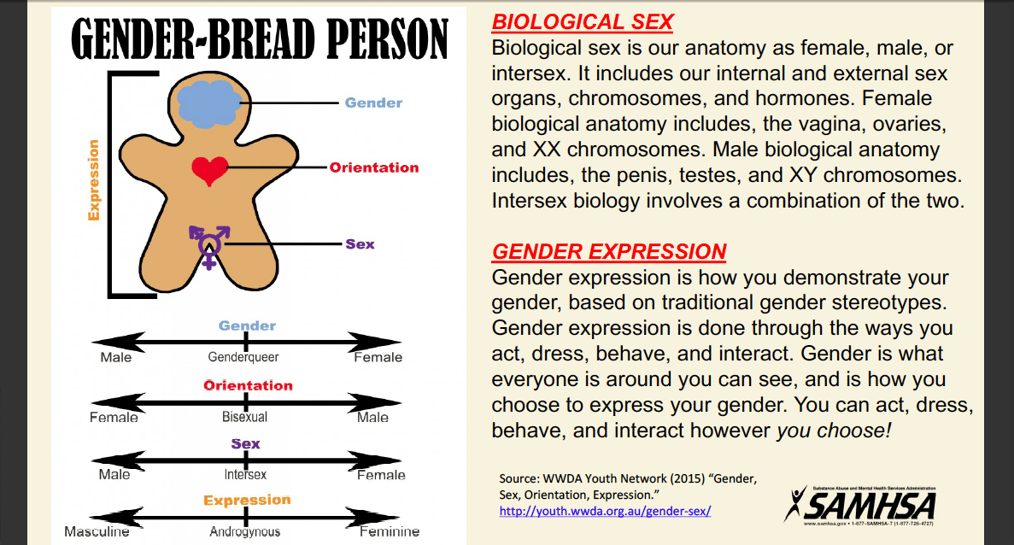 And here is our favorite video introduction to Being Trans, Gender Identity, and What It's All About, produced by a youth group in Australia.

Inclusive Language Examples When Communicating about Gender and Sexual Orientation 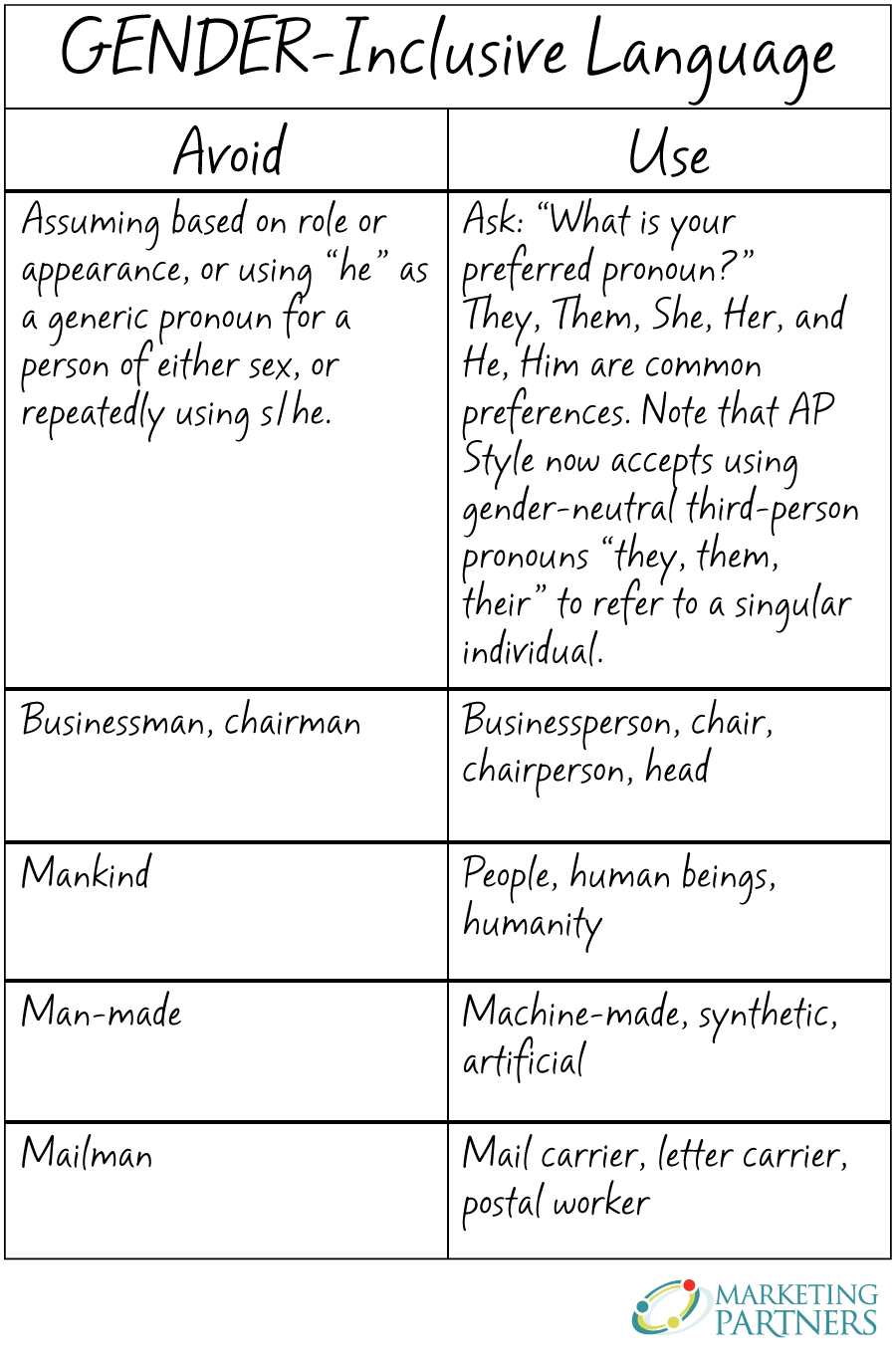 Research and Training Center on Independent Living, Guidelines for reporting and writing about people with disabilities (8th Edition), University of Kansas.

Nature, Nurture, And Our Evolving Debates About Gender - The Hidden Brain

More on the Business Case for Gender Parity - re:Work with Google

The Handbook of Nonsexist Writing: For Writers, Editors and Speakers, by Casey Miller, Kate Swift (OCLC WorldCat® listing for library near you)

Visit the UnderstandingPrejudice.org website to take the baseline survey and then judge a series of advertisements to see which ones, if any, involve prejudice or discrimination. You may be surprised by what you learn.

We created the Guide to Inclusive Language to help you communicate in a way that embraces openness to differences among people, perspectives, cultures, backgrounds, skin color, language, age, sexual orientation, and gender. We hope you find it useful — and invite you to contact us with suggestions.

"Inclusion is the process. Diversity is the result." -- MaryAnne Howland

Email me this Ultimate Guide