On the Power of Words, Labels and Language: Do No Harm 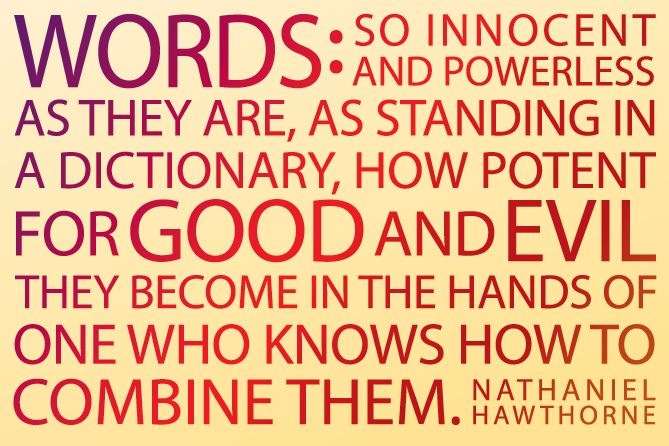 The power of words, labels, language and frames is often a popular topic at the water cooler and lunch table here, but it has been top-of-mind lately. One reason is a recent experience I had when filling out a form to participate in an online forum with people from around the world. The gist of one of the questions was, “How would you describe yourself so other people will like you and want to interact? Explain the social psychology of your response.”  It was a daunting exercise.

The power of words and stereotypical labels to affect your emotions and actions is well demonstrated in science. For more than forty years we have known about the Pygmalion effect of teacher expectation on student performance, and scientists have found that just hearing sentences about elderly people led research subjects to walk more slowly while those with negative concepts of aging age faster and die younger. Such is the power of expectations and self-fulfilling prophecies.

In my recent experience, I was being asked to self-identify rather than be categorized by others with overarching, stereotypical labels. Yet “female” was the only physical label I finally found myself comfortable with. With a large international audience, it felt ridiculous to use the label ‘white.’ I certainly did not want to endorse the U.S. Census Bureau’s continued misuse of Caucasian for race versus cultural ethnicity when there were people participating in the forum who self-identified as peoples of the Caucasus Mountains region of Eastern Europe and Western Asia. (Thankfully, I could attach a photo to my social profile, so my gray hair saved me from struggling with alternative words for older.)

But the concept of self-identification isn’t just important for how people choose to label their gender, sexual, and ethnic identities — it extends to other labels that significantly affect an individual’s life as well, such as mental illness, disability, and economic status. You are likely to be familiar with two examples that seem particularly relevant in America today.

Nearly 10% of American young people have been diagnosed with ADHD at some point in their lives. Some will grow out of the diagnosis but many won’t, leaving more and more teens with labels and struggles unknown in their parents’ generation.

Business marketers and researchers in the public sector routinely use socio-economic status (SES) to segment and label people based on a family’s levels of education, income and occupation. Only six of the 12 commonly used SES levels in the U.S. include the words ‘middle class.’ Yet most Americans believe they are middle class, which is leading to increasing frustration in the face of conflicting economic realities. And what does the future hold for children in a family that begins by labeling itself lower class?

Though like me, many of you have learned through education and personal experience to avoid using negative stereotypes and labels for other people, we may be less sensitive to possible implications when talking to ourselves or writing for others. Many prejudices and biases are subtle and unconscious.

Visit the UnderstandingPrejudice.org website to take the baseline survey and then judge a series of advertisements to see which ones, if any, involve prejudice, implicit bias, or discrimination. You may be surprised by what you learn.

The power of words, in practice

So other than female, how did I describe myself in my self-profile in order to engage with others without offending those from very different cultures and backgrounds? What would be the most inclusive language to encourage others to engage with me while avoiding the common stereotypes and labels applied to someone who looks like I do? This introvert chose to talk briefly about places I’ve lived, professional passions and personal interests. The learning came from thinking carefully about exactly which word to say and why (or why not).

Just for tomorrow, practice noticing what you say, how you say it, and the intention behind your words.

How labels like ‘black’ and ‘working class’ shape your identity

Strength-based speaking (for parents and teachers)

What You Need to Know About Contests & Sweepstakes