I certainly didn’t want to use that statistic. In the midst of a messaging work session on a hot, sticky summer day, the digits shouted out from the page.  If the vast majority of people are not doing the desired behavior, then I could not use the social norms theory of change. If you’re a social marketer or a practitioner of change communications, then you’re likely to have been in a situation where you suddenly realize you need to revisit where you are in the Process of Program Planning and Evaluation.

If your project is like most others, you are focused on a collective social outcome — smarter students, healthier children, cleaner air or something along those lines. There might be other solutions — putting filters on smokestacks, for example – that can be performed without mass behavior change. But you are only using social marketing or change marketing if there’s a specific behavior necessary to reach your goal — like, for example, getting people to actually install those filters properly.

That’s where social marketing begins — with the behavior. You have decided what behavior you want to change. You know just WHO should be doing exactly WHAT. And it may not have been easy. Often that means dissecting your goals into a set of behaviors performed by different groups, then deciding which populations might have an outsized impact or might be the easiest for your organization to change.

A target behavior in social marketing has two parts: the ACTOR and the ACTION.  The two are connected. You can’t address one without the other. A campaign to encourage young mothers to exercise, for example, is totally different than an exercise campaign aimed at retirees. So you took the first step and named (1) the specific actors you want to influence, and (2) the precise action you want them to take. Your choice looks like the example below.

It’s likely you have done extensive primary and secondary research to learn what your actors want, need, think and feel and what others have learned from studying the same group of people. You have examined the context, when the behavior is supposed to happen, and the perceived consequences. You have painted a detailed picture of why these people are not currently doing the target action. In other words: What’s the problem?

Understanding why the problem exists (explanatory theory) is clearly important, but I must confess that it’s figuring out why and how a program will work (change theory) that makes my heart beat faster. Books, journals and papers abound on the subject, but here are a few of the most widely known and commonly applied theories.

For a broad campaign or social movement, you may have combined several change theories to have an impact on different levels of influence. 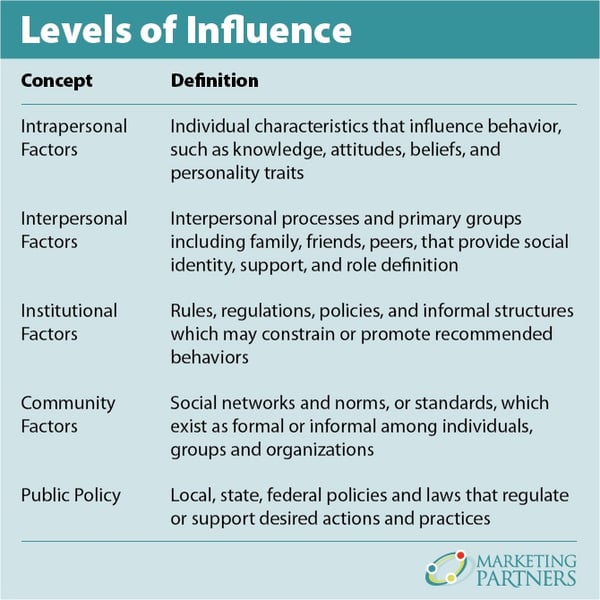 The Plan (Strategy and Tactics)

Strategy and tactics flow naturally from a research-based choice among theories of change. It can be frustrating deep in your planning process if, as happened to me recently, new information suggests rethinking your change theory at a certain level of influence is necessary. But breathe deeply. (I did.) If your campaign or program evolved from such a comprehensive planning process, it is far more likely to be effective.