It's what people do that counts. Not what they're aware of. Or what they think. Or what you tell them. But you know that. If you have been involved in social marketing or change work for any length of time though, you've probably wrestled with the challenge of moving beyond creating awareness to motivating action. The ultimate goal is to motivate action that leads to sustained behavior change. 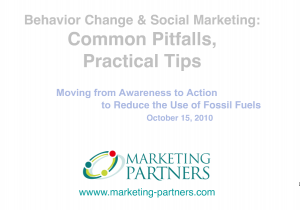 From the beginning, social marketing has been about behavior change. So many of you may be interested in what was said earlier this month when I was asked to directly address this challenge at a day-long conference, "Motivating Behavior Change to Reduce the Use of Fossil Fuels."

The High Meadows Fund brought together energy and environmental nonprofits in Vermont, and professionals with a variety of perspectives to tackle the conference challenge. Stuart Hickox of One Change in Ottawa, Carol Cooper, transportation planner for King County (Seattle), WA, Eileen Nooney of Central Vermont Community Action Council's Vermont Car Coach Program, and I shared our experiences with those working on a daily basis to make change in energy efficiency and transportation. Participants ranged from single-person departments within small towns, to members of regional energy committees, to seasoned staff at large organizations operating nationally.

The words "motivation" and "emotion" share the Latin root, movere, to move, to make something happen (as in generating preference, persuasion and, ideally, action intent). It was exhilarating to hear the other speakers' stories of success with community-based social marketing programs designed to motivate widespread light bulb replacements, increase public transportation use, and share car ownership.

I decided to focus on common pitfalls tripping up those trying to bring about positive social change, or tripping up the professional marketers engaged to help them. After nearly three decades in social marketing, the trick was to keep my stories and examples brief. (I wasn't totally successful on the brief part.) Here are the pitfalls and stories I shared that day, as well as the full presentation outline with tips, key components of effective social marketing programs, and resources.

1. Relying almost exclusively on communication approaches:
“If you communicate the right information the right way, the target audience will do the right thing.”

Story: The diverse partners in Vermont's State Nutrition Action Program worked to develop and distribute appealing and accessible materials to encourage fresh, healthy food choices — only to find that awareness could not move to action until food stamps were accepted at local farmers' markets.

2. Simplistic view of the audience as “them” — the people standing in the way of success.

Story: The Regional Stormwater Education Program wanted to motivate the residents of Chittenden County to change their day-to-day behaviors in five problem areas: pet waste disposal, washing cars, erosion from home construction projects, fertilizer/chemicals used for lawn/garden care, and runoff volume from their homes into the stormwater system. Research from effective and ineffective programs from around the world made it clear RSEP needed to focus on two of five potential audience segments: Fix-It Foul-ups and Neat Neighbors.

3. Inadequate research or downplaying it because you “know” the problem

Story: Diabetes Control Programs across the country were frustrated by the assumed ignorance or stubborn lack of compliance by those with type 2 diabetes or at risk of developing it. Extensive research identified three key factors that had been overlooked: family physicians were downplaying the diagnosis as a “a touch of sugar;”  the materials from pharmaceutical companies were so glossy they were not trusted; while public health materials were depressing, incomplete or communicated a lack of respect.

Story: There are many, many stories about the pitfalls of ignoring or not recognizing competition. There's competition with well-executed commercial marketing campaigns, competition for the audience members' time, competition for attention, competition for money, competition for defining the social norm.  The best examples, because you are all likely to be familiar with them — are the tactics used by big tobacco, many of which have recently been successfully used again by climate change skeptics.

Posted by Pat Heffernan on 10/28/10 12:00 AM
Find me on:
LinkedIn Twitter
Topic: Communication for Change