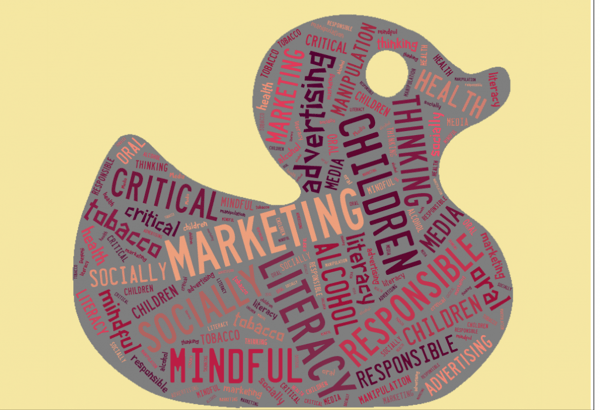 Media literacy, children and mindful marketing have been on my mind lately. My nine-year-old daughter has recently become interested in knowing how things work in the world. For example, she’s questioning the existence of the Tooth Fairy (“It’s really you and Dad, right?), confused over the number of different religions (“But which one is right?”), and reading nutritional information on the back of cereal boxes (“Why do they call it Smart Start when it’s a sugar cereal”). She has also been asking lots of questions lately about what my husband and I do for work.

Advertising and Marketing as Bad

As I was preparing after school snacks for my three girls last week, my nine year old asked (accusingly), “Mom, why do you make radio and television commercials – they are bad for kids!” It turns out the school counselor has been discussing a variety of topics each week with the 3rd grade classes: peer pressure, healthy bodies, and deconstructing adverting aimed at kids. My daughter explained that many ads feature popular children’s characters and make claims like “this product will help you jump higher and run faster.” After discussing the topic for a while, I introduced her to the constructs of social marketing and socially responsible marketing. I reassured my daughter that the work I do in no way uses gimmicks or false promises and I certainly don’t market sugar or cigarettes to children.

In fact, quite the opposite. Some of the campaigns I’ve worked on were focused on fighting early childhood tooth decay and smoking and promoting women’s health. After hearing a full defense of my work and resume, my daughter seemed satisfied and moved onto more important things like dissecting the ingredients contained in a Nutrigrain bar.

As a parent, I have many enlightening discussions with my kids while watching television—usually sporting events. Of course, my girls love the commercials, even though they know you can’t trust what companies promise in commercials. They also can’t believe how gullible marketers must think the public is. (“That guy thinks those girls like him because he is drinking beer?”)

When I found out that my daughter’s school was reinforcing this message, I was relieved. (Relieved, but surprised, and pleasantly so. Certainly, no one was teaching me about such topics in Catholic School.)

Companies are well aware of the buying influence kids wield. According to a consumer tracking study conducted by The NPD Group in 2010, nearly half of the total dollars parents spent on their children went to items specifically requested by the child. In the new digital age, wide-spread marketing to kids poses a new host of concerns for parents. Television watching is passive. Ads seen on TV don’t seem to have as much impact as an ad on your iPod touch that pops up while you are playing Words with Friends. Those mobile ads don’t look like a typical ad with which kids are familiar. Pop-up ads are often disguised as content—a great way to get kids to click and be redirected.

A recent NY Times article on How Advertising Targets Our Children indicates that up to the age of 7 or 8, children are developmentally unable to identify the persuasive intent of advertising. Basically, our children are sitting ducks.

Media Literacy education around advertising (like the teaching being done in my daughter’s school) is a powerful weapon against some of the advertising targeting kids. (Give me a minute while I climb up on my soapbox—never an easy feat in heels.) It is high time companies take a look at their tactics and question the responsibility they have to their audiences and consumers. There are good, conscientious companies out there making a difference. Unfortunately, many of the behemoths like General Mills and Kraft have a lot more money to market their products, making the easy sell of sugar cereals, soda and candy. There are numerous studies that show a link between television time and childhood obesity, as well as the established connection between exposure to alcohol and tobacco ads with underage drinking and smoking.

When my girls see a beer ad for the fourth time and say, “Beer can’t make you do that!”, I feel a twinge of pride. Not because I’ve let them watch enough TV to have seen the ad a fourth time, but because they recognize someone is trying to sell them a bill of goods.