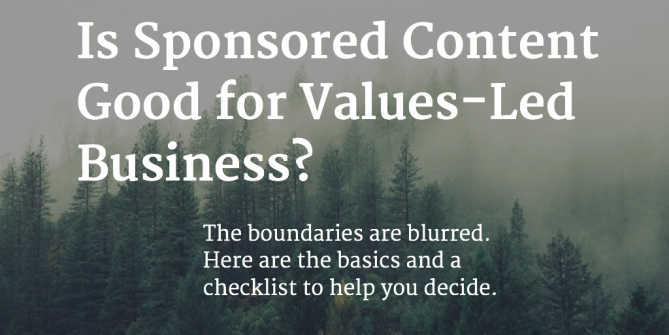 Are you thinking like I’m thinking that it is getting murky out there? My fog meter is registering an increase in befuddling language about sponsored content (aka native advertising), which makes it unnecessarily difficult to evaluate your options. Major traditional publishers such as The New York Times, the Atlantic, Washington Post, the Wall Street Journal and the New Yorker have joined Business Insider and Forbes so now each offers sponsored content in some form. Seems like it is time to revisit the basics and the latest guidelines for paid media for values-led businesses.

Have you seen or heard any of these terms lately?

Multiple studies have found twenty or more terms are commonly used to refer to sponsored articles or posts, and that most readers do not agree on what the terms mean. Even more worrisome for values-led businesses, Contently reported:

Two-thirds of readers have felt deceived upon realizing that an article or video was sponsored by a brand.

59 percent of readers believe a news site loses credibility if it runs articles sponsored by a brand.

As education level increases, so does mistrust of sponsored content.


Sponsored messages in the news

One Ad Age headline is direct about what’s driving the trend: Media Companies Strike Gold With Sponsored Content. And because it blurs the lines between editorial content and advertising, sponsored content offers businesses a new way to influence customers in trusted environments. Some companies report significantly higher conversions from online sponsored content than from traditional digital advertising, particularly in contrast to banner ads.

A few visible examples of the trend:

Many values-led businesses are reluctant marketers who are opposed to advertising and may be drawn to the absence of direct product or sales pitch in paid editorial content that is informative or entertaining. But much is at stake. While customer trust is arguably essential for any business to survive, it has particular significance for values-based organizations and those seeking social change.

Current practices and guidelines have not kept pace as the use of sponsored content has exploded. Four resources are helpful if you are trying to think through if, when, where and how sponsored content might work for you.

The US Federal Trade Commission’s (FTC) already has guidelines for endorsements, sponsorships, paid search, and online ads, but it has not yet issued guidelines on disclosure requirements, language and graphic separation for sponsored content to make sure consumers aren't confused and know an ad when they see one.

The American Society of Magazine Editors updated its guidelines for print and digital in 2014, including recommendations for specific labeling language to aid transparency.

The principles outlined in the Code of Ethics developed by the Word of Mouth Marketing Association (WOMMA), remain relevant and informative, although developed many years ago now.

I suggest using this simple checklist of questions to help you decide if, when, where and how sponsored content might work for you, in addition to the core resources cited above.

2009, FTC’s 16 CFR, Part 255: “Guides Concerning the Use of Endorsements and Testimonials in Advertising.”

DISCLAIMER: I am not a lawyer, and my suggestions are based on my experience and are not a substitute for legal advice from a licensed legal professional.