The Psychology of Words: Revealing more than you realize 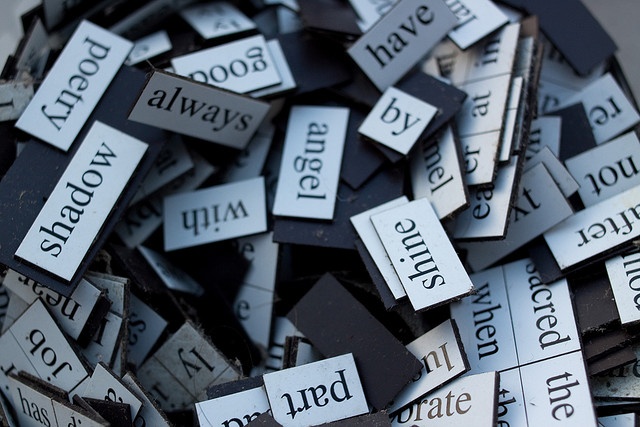 Thoughts on the psychology of words, word use, pronouns, and social issues have been scurrying across my brain lately. Not that you can’t find me obsessing about words on a year round basis, but words and their implications have been in the news recently and thus on my mind more frequently.

Language is the most common and reliable way for people to translate their internal thoughts and emotions into a form that others can understand. Words and language, then, are the very stuff of psychology and communication. – James Pennebaker

What your words on social media say about personality, gender, and age

A fascinating (open source) research article by scientists at the University of Pennsylvania analyzed 700 million words, phrases, and topics collected from the Facebook messages of 75,000 volunteers. The researchers found that they could predict a user’s gender with 92 percent accuracy. They could also guess a user’s age within three years more than half of the time.

Personality, Gender, and Age in the Language of Social Media: The Open-Vocabulary Approach: PLoS ONE, September 25, 2013

Personality, Gender, and Age in the Language of Social Media: The Open-Vocabulary Approach: PLoS ONE, September 25, 2013

The gender and age demographic accuracy is startling, but what I find most fascinating is the personality signals revealed by the topical language analysis of introversion versus extraversion, agreeableness, conscientiousness, neuroticism (the use of the I-pronoun), openness, and emotional stability. This is the largest study of its kind to date, but the article reminds us that:

“Through media such as Facebook and Twitter, used regularly by more than 1/7th of the world’s population, variation in mood has been tracked diurnally and across seasons, used to predict the stock market, and leveraged to estimate happiness across time. Search patterns on Google detect influenza epidemics weeks before CDC data confirm them and the digitization of books makes possible the quantitative tracking of cultural trends over decades.”

Much of this research on the psychology of words is based on work by social psychologist and language scholar Dr. James Pennebaker at the University of Texas. He pioneered the use of Linguistic Inquiry and Word Count (LIWC) to explore large data sets of the words of sex, age and power, personality, emotion, the effect of role, political rhetoric, as well as power and veracity differentials revealed by the use of the pronoun “I.”

What the use of the I-pronoun says about you

Do you think about how often you say the word “I”? Maybe you should. Research from Dr. Pennebaker suggests that your usage of the pronoun “I” says more about you than you may realize. According to Dr. Pennebaker, frequent “I” users subconsciously believe they are subordinate to the person to whom they are talking (or writing). Pronouns, it seems, tell us what people are paying attention to, where someone’s internal focus is pointing. Often, people using “I” are being self-reflective. But they may also be self-conscious or insecure, in physical or emotional pain, or simply trying to please.

This goes directly against what many of us were led to believe —that people who use “I” a lot are egotists, focused on themselves, full of themselves. In a workplace or job interview, frequent use of the pronoun “I” has long been a signal of someone who takes all the credit, someone who is not a team player.

Other than the high-powered and highly confident, who avoids using “I”? People who are hiding the truth. Avoiding the first-person pronoun is distancing. Dr. Pennebaker found people who use the pronoun “I” more often are more honest communicators, more likely to be telling the truth. For someone like me who had to work at freeing my mind of years of formal English language constraints for today’s more informal communications, this finding is a treat. (A product of the British school system compounded by a Latin professor as grandmother, I found it uncomfortable to use the first-person pronoun in my blog posts for years.) 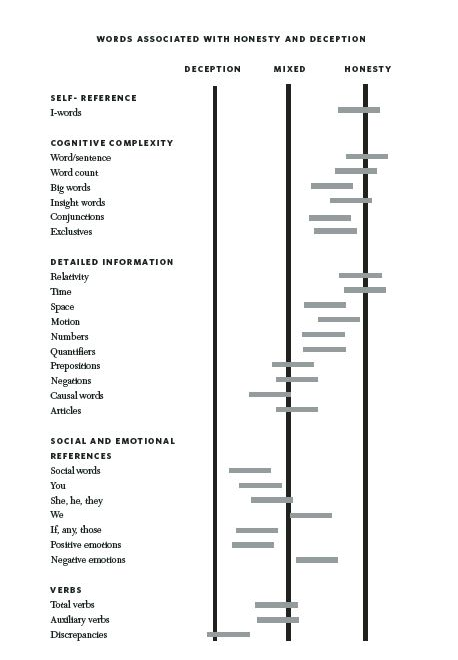 Chart from “The Secret Life of Pronouns,” by James W. Pennebaker

What to do with new knowledge on the psychology of words

So, with thoughts on the psychology of words, word use, and pronouns now scurrying across your brain, how can you apply this new knowledge? For those of us focused on effecting positive change, listening attentively and using more verbs may be strong initial steps to take. More than one political observer noted that in the recent Congressional stalemate over the government shutdown and debt ceiling, it was the women who finally made a difference. And Dr. Pennebaker was probably not surprised.

Males categorize their worlds by counting, naming, and organizing the objects they confront. Women, in addition to personalizing their topics, talk in a more dynamic way, focusing on how their topics change. Discussions of change require more verbs. (Pennebaker)

And how often should you use “I”? More—to sound humble (and like a team player)? Or less—to come across as more assured and authoritative? Dr. Pennebaker says the answer is “mostly more.” So I ask, are you comfortable with that?

Society for the Psychological Study of Social and Policy Issues (SPSSI)

Society for Personality and Social Psychology

The Secret Life of Pronouns: What Our Words Say About Us (Pennebaker)

Personality, Gender, and Age in the Language of Social Media: The Open-Vocabulary Approach   (PLoS ONE, MIT Journal)

What Women in Congress Really Got Done (New Yorker)